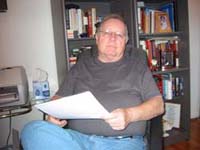 Adapted from Liam O'Flaherty's powerful novel, THE INFORMER is set in the aftermath of the Irish Civil War, illuminating the tragic conflict that divides Ireland today. It is a story of political betrayal, a sin long detested in Irish history.

Gypo Nolan, a brute of a man in need of food and shelter, informs on a comrade wanted by the authorities. With his twenty pounds' reward, he sets off on a binge through Dublin's pubs and brothels. He is hunted down by Dan Gallagher, a ruthless leader of the out-lawed Revolutionary Organization. It is a contest between two wills - one, pure animal force; the other, ideological passion, which in the end brings both retribution and salvation.

Question and answer session with the playwright will follow the reading.

Joseph has written over 30 plays over his career, his most recently produced work was A REED IN THE WIND at the Abingdon Theatre in NYC. He also adapted A TALE OF TWO CITIES for the stage, and the original book for RASPUTIN, THE MUSICAL, both in collaboration with Rob Hoover, Composer/Lyricist.


An Evening of Provocative Theater, Prose and Music


On May 27, 1992, Vedran Smailovic, Principal Cellist of the Sarajevo Opera, witnesses the murder of 22 starving people standing in a Sarajevo bread line. For the next 22 days, Vedran plays a concert in the bomb crater where the 22 died.

Mark Judelson dramatically recounts the true stories of courageous individuals who responded to violence and hatred with acts of peace.


The Life and Times of Dorothy Parker

Dorothy Parker Rothschild was one of the most accomplished feminist and successful literary writers in women's history. Her poems and short stories have appeared in such noted publications as Vogue, Vanity Fair, and The New York. She was a a founding member of the famed Algonquin Round Table. Her colorful and volatile life is brilliantly staged in a One-Woman show by Suzie Devoe.

Suzie Devoe has performed in several New York City theaters, including the Arc Light, and The 78th Street Playhouse. The Life and Times of Dorothy Parker has been performed in New York City, Connecticut and Nyack, N.Y.

An Expressionistic Tragiparody of Warning Purpose

A play by Samuel Harps

Following the play there will be a question and answer session with the HYT Ensemble and a screening of an HYT short film based on the play.

Actors, writers, poets musicians, magicians, dancers and visual artists. Come and share your inspired creations with other artists in an open, free environment.

An evening of Dance

The Chiku Awali African Dance Company of Rockland, Inc. was created in January 2003 as a not-for-profit entity to enrich its community, particularly its youth. Chiku Awali's mission is to promote, encourage and project civic and cultural programs and activities in Rockland County that are representative of African dance and culture.

Her one-woman show on Harriette Tubman

A Modern Day Italian Tale of Love, Loss, Friendship and redemption from the author who penned Doubt and Moonstruck.

Gallery Artwork by Timothy D Miller
Art Opening is on September 20th at 6 until 9 pm at the Youth Theater, there will be light refreshments available.

A Child is Born

Written and directed by Samuel Harps

performed by the HYT Ensemble

In modern day Bethlehem, PA. A Child is Born to a young couple, who the townspeople believe has miraculous healing powers...


The Guy of the film (Glen Hansard) is an unamed Dublin guitarist/singer-songwriter who makes a living by fixing vacuum cleaners in his Dad's Hoover repair shop by day, and singing and playing for money on the Dublin streets by night. The Girl is a unamed Czech woman (Markéta Irglová) who plays piano when she gets a chance, and does odd jobs by day and takes care of her mom and her daughter by night. Guy meets Girl, and they get to know each other as the Girl helps the Guy to put together a demo disc that he can take to London in hope of landing a music contract. During the same several day period, the Guy and the Girl work through their past loves, and reveal their budding love for one another, through their songs.


Fourteen year old Madeinusa dreams of a world beyond her small village, where it is a custom in town that from Good Friday through Easter Sunday, that sin does not exist. This tradition is challenged when a young geologist comes to town from the big city, leading Madeinusa to challenge the townsfolk, and herself, in unexpected ways.


When an African dictator jails her husband, Shandurai (Thandie Newton) goes into exile in Italy, studying medicine and keeping house for Mr. Kinsky (David Thewlis), an eccentric English pianist and composer. She lives in one room of his Roman palazzo. He besieges her with flowers, gifts, and music, declaring passionately that he loves her, would go to Africa with her, would do anything for her. "What do you know of Africa?," she asks, then, in anguish, shouts, "Get my husband out of jail!" The rest of the film plays out the implications of this scene and leaves Shandurai with a choice.

In 1914, World War I, the bloodiest war ever at that time in human history, was well under way. However on Christmas Eve, numerous sections of the Western Front called an informal, and unauthorized, truce where the various front-line soldiers of the conflict peacefully met each other in No Man's Land to share a precious pause in the carnage with a fleeting brotherhood. This film dramatizes one such section as the French, Scottish and German sides partake in the unique event, even though they are aware that their superiors will not tolerate its occurrence.